Sexual Harassment Against Men in the Workplace

Can Men Be Sexually Harassed?

California’s generous anti-sexual harassment protections apply equally to both men and women, regardless of sexual orientation, recognizing that everyone is vulnerable to such abuse.  Unfortunately, sexual harassment against men is prevalent in the workplace but not as talked about.  Just as women, men deserve to feel safe and to be treated with dignity at work.

How Common is it for Men to Be Sexually Harassed?

In 2021, about 16% of sexual harassment complaints filed with the Equal Employment Opportunity Commission (EEOC) were filed by men.  Over the years there has been an uptick of complaints by men.  However, this data is unlikely to reflect the true number of actual victims.  Both male and female victims are hesitant to file complaints.

Male victims may be hesitant to report sexual harassment or pursue a claim out of fear of not being taken seriously or ridiculed.  This may be because male victims are aware that many people assume that women are generally the victims of harassment and/or may fear that a complaint from a male would not be taken as seriously as if it came from a woman.  The dialog related to “me too” victims centers around women and there is not as much conversation in our society recognizing that males are also victims of sexual harassment.  Men who were sexually abused as boys may respond differently than men abused as adults. Fear of retaliation and/or not being able to be the provider, doubt, shame, failing to be “strong enough,” anxiety, withdrawal from relationships or friendships, humiliation, depression, among others, may also prevent men from coming forward.

Each victim’s reaction to sexual harassment is individual and depends on the circumstances.  We encourage male victims to reach out to us for a free, confidential consultation with a sexual harassment attorney to obtain guidance and learn the power of the law intended to protect you. It’s also important to begin documenting sexual harassment when it occurs.

Can a Woman Sexually Harass a Man at Work?

Yes, there are many documented cases of sexual harassment against men perpetrated by women.

Can a Man Sexually Harass Another Man at Work?

Sexual harassment does not always start out overtly. By way of example, what may first begin as innocent banter may evolve into unwelcomed insinuations and a hostile work environment. In one case of male on male harassment, an employee started out as a volunteer and was hired as a paid intern. He was straight and married.

His supervisor befriended him and there were some risqué jokes shared. Then the supervisor started making jokes and insinuation that were sexual and crass and began showing the male intern pornographic images and inquiring about the intern’s sexual relationships. The supervisor insisted on dinners and meeting at his home. The intern complained to another supervisor who reacted by retaliating against the intern. The employer attempted to diminish the interactions as mere banter between male colleagues but clearly that was no longer the case.

Moreover, men can also fall victim to the same tactics that harassers use to sexually harass women. The disparity of power in the workplace is easily abused.

No one should have to go to work and be sexually harassed. If you are in this situation, we welcome the chance to help you and speak with you. Call our office for a free consultation with a Los Angeles sexual harassment attorney dedicated to fighting for California employees. 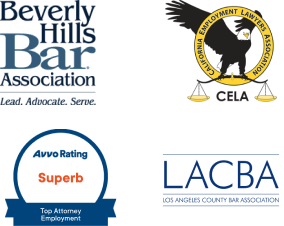